PERSONAL INJURY LAW 45 YEARS
Open During COVID 19. Call Us Now at 866-INJURY-2 or 866-465-8792
Results & Experience You Can Trust!
45 Years of Experience
Over $100 Million Recovered
Over 98% of Cases Won
Contact Us for a Free Consultation
Home
Practice Areas
Types of Accidents
Bicycle Accident 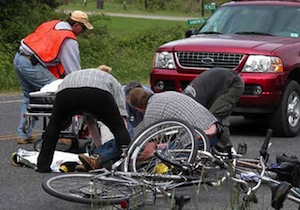 Have you or someone you care about been involved in a bicycle accident in Los Angeles, the San Fernando Valley or elsewhere in California?

Due to the pleasant weather, a desire to live a healthy lifestyle, and/or a wanting to help our planet by "going green," California has many bicycle riders, who ride to work, around universities, to do errands, and just for exercise and fun. Unfortunately, due to the large amount of bicycle riders in Los Angeles, Ventura and Orange counties, there are a large number of bicycle accidents, especially involving children.

Bicycle accidents occur in many ways, including when a careless driver drifts into a bike lane and swipes a bicycle rider the driver could not see, when a bicyclist is hit by a car coming out of a driveway or parking lot, when a driver does not see a bicyclist making a turn on a busy street, or when a bicyclist is riding on the sidewalk and collides with a car.

No matter how a bicycle accident has happened, the first important thing to do, after getting medical care, is to determine who is at fault. Usually, because bicyclists do not have the protection that a motor vehicle offers, the bicycle rider is the most injured from the collision. Depending on the type of bicycle accident, these injuries can often include broken bones and fractures, pain throughout the body and cuts, scrapes and other abrasions, contusions and bruising often called road rash. These injuries may be worse in cases when the bicycle rider is not wearing a helmet or other protective gear.

Because of the lack of protection for bicycle riders, even a "minor" impact with a car or truck may cause serious injuries to the bicycle rider. There is often a prejudice against bicycle riders, wrongfully blaming them or placing full liability on them when, in fact, it is not their fault or there is comparative negligence of the other parties involved.

If you have been injured while riding a bicycle, do not let the other party's insurance company wrongfully blame you for the accident. We have seen insurance companies come up with all sorts of bogus reasons why the bicycle rider was at fault for an accident, when in fact the other driver caused or contributed to causing the accident.

Oftentimes a Traffic Collision Report (usually referred to as a Police Report) will blame a bicyclist for an accident that would not have occurred had the vehicle operator exercised due care before making a turn. We do not accept these bogus arguments and will fight to obtain the compensation that the injured bicyclist deserves, including all damages allowed under California law for all injuries suffered, such as the following:

Our firm also has successfully settled several bicycle accident claims where the other party's insurer denied the claim and refused to make any payment at all. In one such recent claim, after another experienced attorney actually dropped the claim (and did so after consulting with another attorney and also a professional investigator), the client then hired our firm and we obtained the full policy limits for our client!

Take the pressure off yourself and let someone experienced in handling such matters assist you. Call our offices now for a FREE consultation with an experienced injury attorney or any member of our legal team.

There is NO charge for our initial consultation — it is absolutely FREE!

If you had a bicycle accident, our personal injury & wrongful death accident lawyers offer an absolutely FREE & CONFIDENTIAL case consultation and evaluation and we work on a contingency fee. That means there is NO fee until you WIN and then the fee comes out of the recovery usually paid by the other parties’ insurance company and not out of your own pocket.

We offer FREE consultations and evaluations to those hurt in accidents in Los Angeles, Kern, Orange, Riverside, San Fernando Valley, San Bernardino, Ventura and throughout all of California and there is NO fee until you WIN!

We look forward to speaking with you today and helping you resolve your injury accident legal problems.

FREE CONSULTATION * NO FEE UNTIL YOU WIN !

Contact Us
Practice Areas
Legal Advice
California Personal Injury Lawyers Blog - Bicycle Accidents
Client Reviews
★★★★★
You guys did a great job in settling my case! Hope you all do well and prosper. Thank you for a job well done. Jackie C.
★★★★★
We had two prior attorneys who were unable to settle our car accident case. We then hired Gary and Robert Walch and they not only got us both great settlements, but personally spent time with us explaining everything clearly. We couldn't be happier. Thank you! A.M. and M.A.
★★★★★
Dear Gary, I just want to thank you for working so hard on my case! I know at times we were a bit difficult, but you did a great job. I thank you and your son for good results. I will pass your number on to any one that I run across who may need a PI attorney! I send you warm regards. Julie B.
★★★★★
Dear Gary, I just wanted to tell you how much I appreciate all your efforts on my behalf. The car accident was a very traumatizing experience for me. But knowing that I could trust you and your son, Robert, helped alleviate my fears and worries. Carmella C.
★★★★★
Thank you for all of your hard work and thank you for making it so easy over e-mail for me. I'm a busy working mom of an Autistic 5 year old son and you guys were great. I will definitely recommend your services to family and friends. Edna G.
View More
Submit a Law Firm Client Review